One of my many guilty pleasures is Asian buffets. I realize I am not going to get authentic regional cuisine from any Asian country or region, but I have learned that statistically, there will be a few dishes that withstand the steam table treatment OK, and that it’s not necessary to try ALL the offerings just because they are there.

Tucked into the Plymouth Meeting Mall for many years, the King Buffet has been pretty consistent. Though the sushi is nowhere NEAR the quality and variety found at the Pan Asian up in Lawncrest, they do keep the nigiri replenished, and the rolls, while simple, are quite serviceable.

My typical strategy here is a three-trip one (I forgo dessert which tends to be jello or soft ice cream) and stick with a sushi / appetizers / main course triad.

Tried and true apps include fried pork dumplings ( these were unfortunately a little cold,) sui mei , chicken wings, bbq pork, fried bananas and deviled clams. The VERY interesting golden shrimp here were an interesting new one for me. All were serviceable or better.

In the main course space, all Asian buffets tend to be somewhat similar. Te one beef dish with be pepper steak (which I chose because I knew the colors of the peppers would photograph well.) The round steak was actually very tender (no doubt due to a healthy dose of Adolph’s tenderizer) but this is not a dish I’d ordinarily select to fill up a large spot of my plate. No pork dishes were present. Usually, there are half a dozen variations of chicken (here the salt and pepper chicken with shrimp was quite good.) The teriyaki chicken is never bad, especially over lo mein. The honey chicken was cloyingly sweet (as were several other offerings like General Tso’s)

As there was no bok choy or eggplant I went with string beans over spinach as the obligatory green.) They were relatively crunchy and mad me feel like I was eating a healthy balanced meal.

My used plates were alway removed by the time I cam back from a tour of the steam tables. My server suggested I get some dessert (which I politely declined) – but it was a nice gesture, as the staff in these places rarely make ANY conversation at all.

With a large unsweetened ice tea, my bill came to $10.45. Considering I had consumed as much as I desired, I can declare this place a bargain (with the caveat that not EVERY dish will be a winner.) 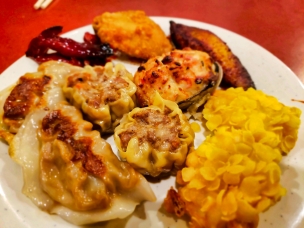 I work out of my home. Lunch is a necessary diversion for me. My wife and and I both pretty competent in the kitchen (she does more complex stuff like traditional sauces and I tend to stick to grilling and BBQ.) When we DO go out to dinner, it's usually downtown, and it's usually ethnic cuisine we lack the ingredients and technique to execute. When we DO eat dinner locally, we are often surprised at how excellent a small place like Cerise can be. Be that as it may, I will mostly be writing about lunches.
Loading Comments...
Comment
×
<span>%d</span> bloggers like this: