So after having been apprised of the existence of this five-week-old chicken shack by Lauren Steltzer on this group, I made the short trek across the river this A.M. As I had early afternoon work duties, I got there at their advertised opening at 11:00 to see the windows flung open, but contradictory “Welcome” and “Sorry We’re Closed” signs hung in front. Yelling inside to the the single employee did not result in an intelligible response, so I walked across the street to Johnny Mananas for a drink, and to hit their dubious ATM (after checking for card scanning attachments.) Foghorn does not seem to accept cards.

15 minutes later, I returned and tried the door, to be notified that they ARE in fact open at 11:00. In any event, I would have waited anyway to make sure the oil was hot.

There was a lot of takeout activity, but there is ample seating, mostly a long counter worthy of a 1950’s Woolworth’s. Chicken tchotchkes decorated the shelves, and on the wall behind me was a huge chalkboard anatomical drawing of chicken musculature such as one might find on the wall of a Veterinary school. Some might find that off-putting. I personally did not. A half dozen hot sauces (including a somewhat rare peri-peri version were available on the counter.)

The menu is simple. Chicken, pickles, cole slaw and fries in various combinations and sizes. I went with 1/2 chicken (pickles instead of slaw) and an order of hand-cut fries. The fries were pricier than the area average at $4, but would be ample for two to share. They were VERY good, hot, and crispy/tender.

They, and the chicken arrived within about 5 minutes of ordering. I understand a pressure frying method (pioneered by Col. Sanders) is used. It DOES make for quick, juicy and crispy yardbird. The seasoning was mild, and the texture of the breading perfect. No grittiness, or soft greasy spots. I suspect the chicken may be brined, or if not, just very fresh and very good quality, as it was juicy, tender and flavorful.

The homemade pickle chips were a luminous green, and slightly garlicky.. neither dill nor bread-and butter. Nice vinegar tang though, to contrast with the richness of the chix.

The chicken orders come with a choice of sauces. I went with black pepper honey (as honey on fried chicken is something I grew up eating.) It was delicious, but eventually my palate craved more stimulation, so I went to the Peri-Peri sauce which lit up my last couple of pieces.

I do find their anatomical interpretation of a “half chicken” interesting. There was a leg, a thigh, a piece of bone-in breast with a part of a wing attached, and two boneless chunks of breast. I suspect this is done to ensure the chicken cooks evenly. It must be hard for a fry chef to do wings and breast and time them to come out evenly cooked just due to the mass. In any event, I was more surprised than disappointed. All the pieces were fine, even if some had no bone to gnaw (one of the primal joys of eating real chicken.)

I understand the owners are the same who run In Riva (the hipster pizza /small plates place nearby on the river.) Totally different vibe, but In Riva is more a bar. Foghorn sells cans of soda for $1. Service was cheerful.. chatty, when engaged, but not overbearing.

I may not RUSH back, but they certainly fill the need for a non-chain fried chicken place in this town. I’m tired of waiting for the promised Gus’ World Famous to open. 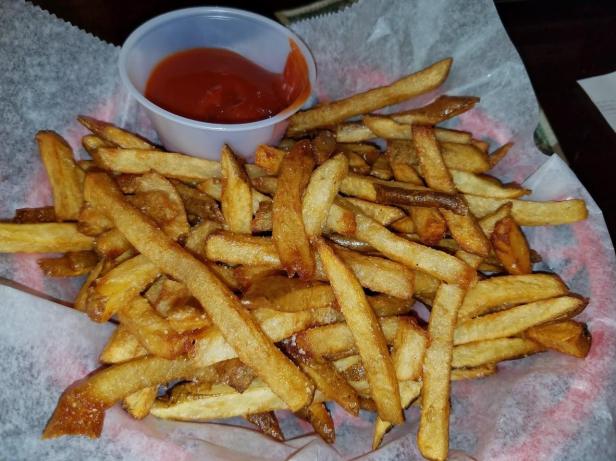