I must admit my experience with Ramen consists of bachelor days eating TopRamen from a microwave and 3-4 forays into Manhattan’s Financial District at 3:00AM when they are the only places still open.

This place compares very favorably with the latter. Not at all “dumbed down for the suburbs” the menu is extensive and includes all the standards I’ve seen and more. They were out of the duck Hirata Buns, so I went for the more common Gyowza. They were delicate, tasty and adequately filled, but the innards were at best lukewarm, and one of them just cold.

The Akamaru ramen seemed to offer the most Berkshire pork, so I went for that. One of the things I realized is that the kitchen basically works with cold ingredients, and relies on the broth to heat them. Giving a good stir, and waiting a few minutes seems to be the proper strategy for the ramen dishes. Also, the seasoning is sprinkled on top,. as opposed to blended in, so your mouth can get surprised with a blast of Umami, salt, ginger, or whatever. It was not overly salty to my tastes, but I expect the sodium content was probably at the top of the charts.

The pork was EXQUISITE. Berkshire pigs are the American equivalent of the Japanese Korobuta…heritage breeds from the days before all the fat (and flavor) was bred out of them. I could easily have just eaten a half pound of the pork plopped unceremoniously on a plate (but suspect it would probably run over $50 if they served it like that. The amount in the ramen was a tease, but ah, what a tease.

Service was very friendly. The line is all young Japanese men. The waitstaff was mixed young Japanese and American women armed with iPads, but no clue as to what the various dishes were that the line cooks were furiously shoving out to their station. I suspect once they get familiar with the menu, service will improve. I know I could not distinguish among half the offerings at sight.

I will be making a weekly trek back to work my way through the menu. I may give them a couple of weeks to fine-tune the operation, but if I were you, I’d give them a shot right now. They seem to be doing great business (which speaks volumes about the Main Line appetite for exotic foods.) Lots of little kids happily slurping along with the parents. A very welcome addition to the hood. 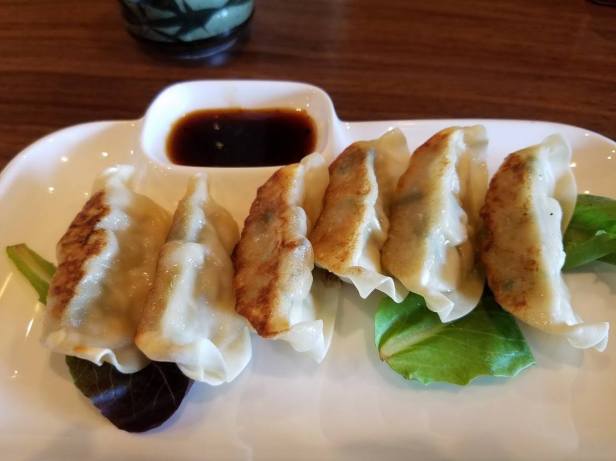