I went here for lunch the day they opened, and they were unable to make a proper Cuban sandwich. I was not optimistic for their survival. It took a long time (and a Groupon) to convince me to return. I am REALLY glad I did. This was DELICIOUS and inventive Cuban fare.

I’d lived in Florida at one point in my life, and ate a LOT of Cuban in Ybor City (Tampa.) I realized “authentic” Cuban was hard to nail down, as these were people who improvised by necessity according to ingredients available. Staples were pretty constant, but one could never assume a dish of any given name would taste the same in two different restaurants.

The bread, not pictured here due to the speed at which it disappeared, was light and airy .. ALMOST like what you’d get in Tampa. In retrospect, I’m glad the basket only contained four grilled slices, as I would have consumed a loaf slathered with the subtly sweet guava-cream cheese spread proffered in lieu of butter.

The entree I chose was the Cerdo con Platano – Roasted Pork in a Coconut Rum & Banana Cream Sauce.
Served with Mashed Yucca & Fried Plantains. It was EXQUISITE. Yucca was creamy, sauce was playfully sweet and the plantains just a LITTLE crispy. My wife ordered the classic Ropa Vieja (old clothes) made with the original beef (they also offer chicken, pork, and a vegetarian version.) The chipotle in the tomato sauce distinguished it from others we’d had or made. Cuban food it not usually HOT, and this was not, but the flavor was just right to make this their own. Rice and beans were subtly seasoned, and the proper side for this.

Portions were generous, server was knowledgeable and on a Thursday night, it was uncrowded, so pleasantly quiet.

Moral of the story is … Never base an impression on opening day. This BYOB got it’s sea legs, and we will be returning regularly. 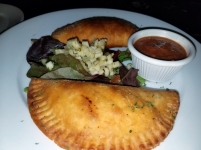 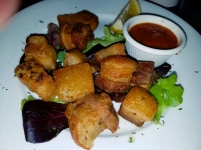 I work out of my home. Lunch is a necessary diversion for me. My wife and and I both pretty competent in the kitchen (she does more complex stuff like traditional sauces and I tend to stick to grilling and BBQ.) When we DO go out to dinner, it's usually downtown, and it's usually ethnic cuisine we lack the ingredients and technique to execute. When we DO eat dinner locally, we are often surprised at how excellent a small place like Cerise can be. Be that as it may, I will mostly be writing about lunches.
Join 40 other subscribers
Loading Comments...
%d bloggers like this: