It may not have been fair to visit this place three days after dining at the lower east side Ivan Ramen (always #2 or 3 in any list of New York’s best ramen joints.. http://www.ivanramen.com/ )

But, it’s new, I had to grab a quick lunch, and hey .. How could an authentic Japanese place not stand up to a noodle shop run by a Long Island Jewish boy? There are apparently 20 ways to say “I’m sorry” in Japanese, so pick one, but chalk up a win for the Jewish boy.

It’s not that @Ramen was BAD in any way. The beef dumplings, in fact, were superb. Savory, tender and stuffed with filling. The ramen was a nice sized bowl, served with a small side of chives and peppery pickles. I chose the Tonkatsu (egg noodles and roast pork) as a bellwether.

The pork was quite tasty, and the two slices should be adequate protein for the bowl (though I sort of wish I’d ordered extra.) Noodles, however, were reminiscent of the 15-cent Top Ramen variety. Probably not a BAD thing, and in-line with most noodle shops, but compared to the rye noodles proffered by Ivan and co. seemed to lack body and flavor. I could not really detect any real taste to them, and the same could be said for the milky broth until the chives and pickles steeped a bit. I suppose it’s really necessary to let the bowl sit for five minutes to render judgement, as it DID pick up flavor over time. Cabbage and bean sprouts added to the texture, but only the bok choy gave any vegetable flavor. The ginger drink was very nice as an accompaniment.

The price is right, though, and the service was VERY fast, efficient and polite. Again, I suppose if I let some time pass between a ramen nirvana experience and this place, I’d be judging them much less harshly. 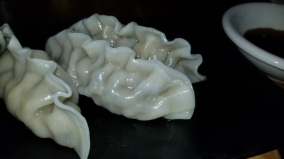 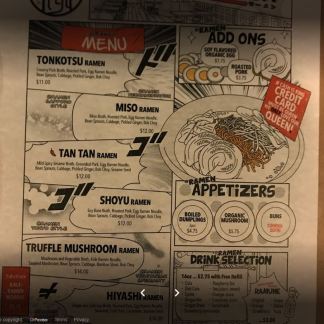 I work out of my home. Lunch is a necessary diversion for me. My wife and and I both pretty competent in the kitchen (she does more complex stuff like traditional sauces and I tend to stick to grilling and BBQ.) When we DO go out to dinner, it's usually downtown, and it's usually ethnic cuisine we lack the ingredients and technique to execute. When we DO eat dinner locally, we are often surprised at how excellent a small place like Cerise can be. Be that as it may, I will mostly be writing about lunches.
%d bloggers like this: